Looking Back To Move A Business Forwards

When we first met the founders of Zeus, they had recently sold one of the most successful pizza franchises in Australia and now wanted to create a dining offering that had a strong sense of purpose. With one store already open in Sydney offering an authentic fast-casual Greek dining experience that’s true to the founders’ heritage, we were able to go and discover for ourselves something that’s unique to Greek hospitality – ‘Filoxenia’; an ancient philosophy which in English means ‘a generosity of spirit’. And with that, we knew we had the seed of something powerful and relevant to work with.

Since then, our partnership has helped Zeus expand rapidly with six new stores opened in 2015 and eight more planned for 2016. And with legions of fans fast becoming advocates for what the Zeus brand stands for, this is just the beginning.

We developed the purpose based creative brand platform of ‘The Philosophy of Food’ that positions Zeus as not only the providers of authentic Greek food, but also as having a strong set of values around what they do.

In doing so, this platform sees the brand drawing upon the wisdom of ancient Greek philosophers to relevantly inform and justify their nurturing and generous behaviour towards staff, suppliers and society as a whole.

Giving meaning to ‘The Philosophy’ of Food’, this brand manifesto is painted on a feature wall in every Zeus store and can also be found in the boardroom of the company office headquarters. 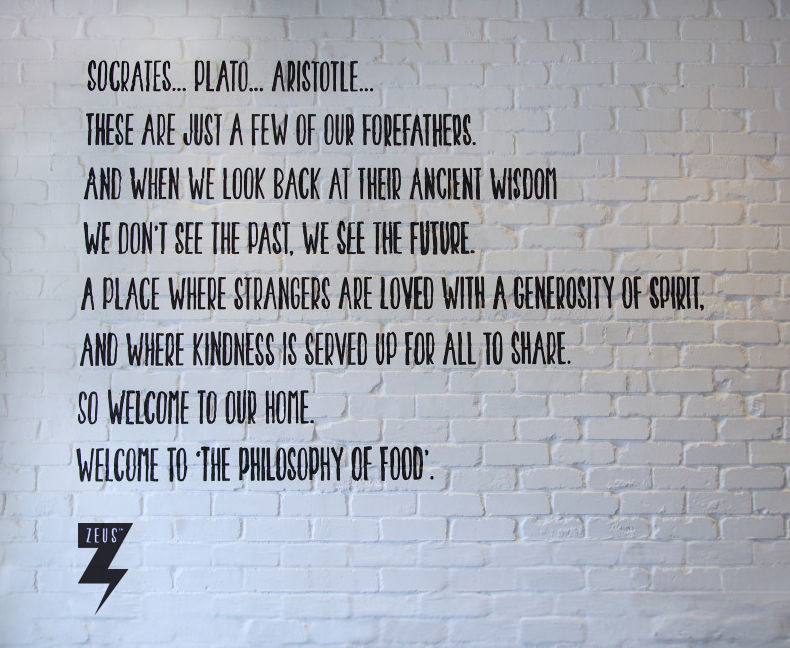 Looking at the brand through lens of ‘The Philosophy of Food’, we used Socrates’ teachings on ethics to convince Zeus to switch their energy to GreenPower, and also encourage their customers to do the same. In doing so, Zeus became GreenPower accredited and promote this behaviour on their website, menus and social channels.

Following on from becoming GreenPower accredited based on Socrates’ teachings; we launched a first for Australia – a fleet of electric delivery scooters that produce zero emissions. Aside from being mobile billboards themselves, the scooters were also promoted in this film that played on Dimmi’s social channels.